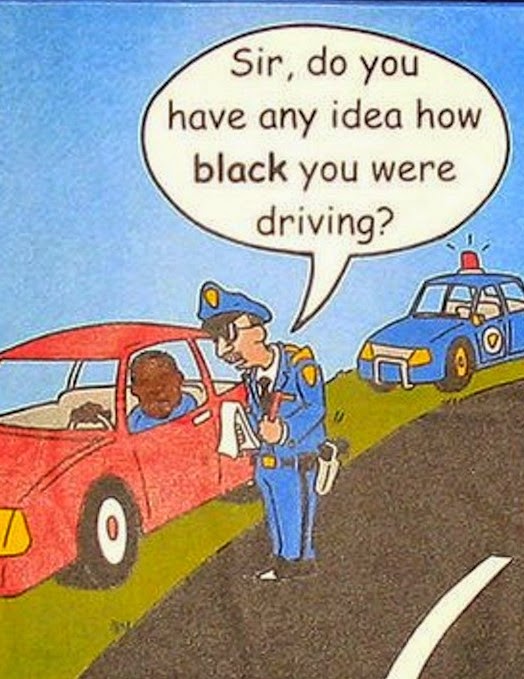 Working in a legal environment with persons of different races, cultures and experiences means that more often than not, our lunch room is filled with many exciting stories. Add that to the fact that my colleagues are defenders of the poor, human rights activist, community activist etc, then our lunch room conversations take an interesting turn when issues of racial discrimination, stereotyping, racism, and all those other nasty words we use to describe the recent events taking place across the borders; and perhaps, even in our local haven called Toronto, are lunch time topics.

With so much racial tension across the border, I’ve recently found myself asking how racist is my city? I seem to have this naive impression that Toronto is not very racist and if racism exists then, that racism is very covert.

And apparently, I am VERY WRONG. It is the view of a few of my colleagues that Canada, especially Toronto is very racist. And perhaps, it is true, and this had me thinking, if this is true, then have I been a victim of a covert racism?

And so it began. These issues in America have crossed the border lines. We here are openly having those tough discussions. And frankly, I am starting to feel the struggle, the frustration, the anger, the disappointment that my people are feeling in the US.

Not so long ago, I was having a discussion with my colleagues of colour, about the recent shooting of the African Americans in the church.

Can you believe that this guy shot and murdered not 1, not 2, but 9 people, and he was taken for a food run to Burger King because he was hungry?

Yet, Ms. Sandra Bland, was handcuffed, head slammed in the ground (allegedly), kneed in the back (allegedly) and arrested – for what?

At this point, the answer is not clear – aggravated assault on an officer? But wait – at what point was that officer assaulted? But anyways, these questions are not for me to answer. These are the questions I’ve seen many people struggling to come to terms with.

What I want to address is the growing trend of how minorities, immigrants, blacks, non-whites are treated in today’s society.

I am pretty sure that I am not alone in realising how quick and easy it is for the media to distinguish and mitigate the impact of white crime vs that of non-white perpetrators.

You get the drift…. There are different labels attributed to crimes committed by people based on skin colour. And the media perpetuates it.

And I do hope that for all intents and purposes, everyone can see how stereotypical the above was; but that is the reality.

But what I did not realise was that perhaps that kind of thinking may have permeated my surroundings. That perhaps, people do not realise how great the influence of the media can be.

And it hit home to me during a discussion when a colleague said that the Charleston shooting suspect must have had mental health issues.

And that threw me off and frankly, irritated me. Why – because I thought that the mental health card was being pulled way too early in the game. I’m not saying that this individual does not and did not have mental health issues. What I stood up for was the rush to assess, the rush to characterise and to mitigate the persons actions.

If it were a person of colour, then this excuse would only come as an explanation really late in the game – much later, with perhaps even proof to back up these claims.  And yet, there’ll still be privileged skeptics who won’t accept that as a viable reason for the actions. (IN MY OPINION. That doesn’t mean i was right, but at the time, that was my perception).

But hey – that’s the society which we have accepted and which we continue to support, continue to allow such treatment to thrive.

And recently, I have been saying to myself – I could be Sandra Bland being pulled over for failing to signal. And what would I do in this situation? What would people think about me? Would the first rush to my defense be mental illness?

And the answer to the latter will perhaps always be the same – NO.

Frankly, that rush to “defend” for lack of a better word, or that rush to make the act less horrific is not reserved for people like me.

What scares me now is whether these kinds of horror stories will be part of my life? Will my Toronto fall victim to the atrocities going on in the states?

But hey, in my Toronto, and in my reality, these events DO NOT occur as they do in the US. And I do pray that they never do.

But on a happier note – there are many more who will stand up to truth, speak up about injustices, fight the good cause, do what is right! And for that, my TORONTO IS LUCKY. My TORONTO IS BLESSED, my TORONTO IS ALRIGHT.

Frankly, my experiences say NO – my Toronto is definitely not racist. But then, I’m a black woman – in the legal profession.

Perhaps that question should be posed to a young black male – is your Toronto racist? Have you ever experience driving while black?

And perhaps his opinion is the one which should matter the most.

But rest assured – if I did run into a situation which I felt was prejudicial to me because of my race – I’D SPEAK UP ABOUT IT.

And if ever I live to experience a driving while black encounter – I just pray that I get out of it, and hopefully, this encounter doesn’t happen in the US.

But until then…. I still have faith in humanity. I still believe that there’ll come a day when things will change. Something will happen when it will no longer be denied. And when that day comes, I hope that I’m around to sing “FREE AT LAST, FREE AT LAST, thank GOD Almighty, we are FREE AT LAST!!”

And that will always be the dream at the end of the rainbow for us.